I’m wary of having it predetermined that my trip to the movies will be an “experience.” Last year I told a friend I was hesitant to see Terrence Malick’s The Tree of Life. She’d seen it and raved about it. “It’s not a movie so much as an experience,” she said.

I took this as a warning. If I want an experience, I’ll travel, or plug my hair dryer in and balance it on the edge of the tub while I bathe. If I buy a ticket to a movie, I expect it to sit in a dirty seat for about two hours and watch reasonably well-developed characters resolve a central conflict.

I don’t go to 3D movies. I tried it with Avatar, and between the glasses squeezing my head and the popping out stuff and Sam Worthington being about as engaging as a napkin holder, I just couldn’t deal. I’m like one of those people who said “talkies” would never stick, or who scoffed at Technicolor. I’m prematurely seventy-six. But I would honestly rather just skip the third dimension. Whenever Hollywood re-releases a Disney movie in 3D, I attend the one 2D showing available, usually at 11:45 a.m.

But then here comes Titanic, sailing back into theaters in three dimensions.

I was in middle school when Titanic came out, and I’d just traded my love for horses for a crush on Leonardo diCaprio. Titanic was the first PG-13 movie I got to go see with my friends; no parents allowed.

I could have done without the romance. It was often the case in my childhood that I ignored the plots of disaster movies and was startled, when I was older, to learn what the movies were actually about. All I remember about Jurassic Park as a kid was having to sit through inexplicable scenes during which there were no dinosaurs eating people. Same story with Jaws—there were scenes that didn’t even take place in the water. WTF? The people go out on a boat to find the shark, and then spend the whole night talking? Unacceptable.

Now I watch both of those movies and am more interested in the characters and their moral and ethical plights than in the devouring.

Grown up J.A. realizes Titanic is about class and true love and men getting punished Greek tragedy style for flying too close to the sun and Bill Paxton jonesing for a giant diamond worn by a king.

When I was eleven, it was about a ship sinking.

I would have been happy to see Titanic in 2D in the theater again.

But I kept looking at that movie listing: Titanic: A 3D Imax Experience.

I’d never been to an Imax theater, outside of museum Omnimax stuff about oceans and tundras

So yesterday at 5:05, I took off for Cobb Cinemas.

I should have left five minutes earlier. I always give myself ten minutes to get there, and it takes fifteen. I know this. Plus, I was behind this station wagon from Mississippi that was traveling at a pace I would describe as Brontosaurus.

I will confess to a tiny bit of road rage—a gift I’ve passed on to a character in my latest WIP. I don’t know if I’d call it “rage” so much as “intense irritation.” Okay, it’s rage. I just don’t understand why, when a light turns green in this town, people don’t put their feet on their gas pedals and drive. This town MOSEYS through lights, and as someone who is chronically tardy, I cannot afford to mosey.

So I’m grumbling at the Mississippi Mosier and figuring I’m probably going to miss the “Put on Your 3D Glasses Now” announcement. The show starts at 5:15. I get there at 5:17 and get in line for tickets behind a woman and her son who are buying tickets for a movie that doesn’t even start until 5:45. And the woman is asking the ticket seller all these questions about the movie. IMDB IT!!! IMDB it before you leave your house good christ I am TRYING to have a 3D Imax experience here!

Finally woman and child MOSEY off.

I ask for a ticket for Titanic.

“Is there any other kind?”

I am here for an Experience.

I take my ticket inside. The ticket taker rips it, hands me 3D glasses, and tells me to enjoy. I start to ask “Which theater?” What a dumb question. Obviously it’s the theater with the neon blue doorway and the screen outside it showing clips from other movies I might one day want to see Imaxed. I enter, prepared to fall to me knees and weep at Imax’s glory.

It’s pretty much a regular theater with a slightly wider screen.

It’s 5:23, but the movie hasn’t started yet. Where do I sit? There are only like four other people there, so I have my pick. My instinct tells me to sit close to the front, but I see two other girls heading for the back, and it’s crowd mentality, baby. I follow them and end up in the center toward the back, right behind an older couple. The man is hacking, making his giant belly wobble. He is touting the virtues of steroids and habanero peppers (not together).

I think I should move. Should I move? Do I have time? I don’t want to be moving when the movie starts.

I pick up my bag and dart to the front. It’s kind of like roller coasters—I like to sit in the front of the car so no one else gets to experience the sensations before I do.

The movie still hasn’t started. I’m treated to samplings of Lenny Kravitz, Andrew Bird, and MC Zulu on CinemaRadio. I can hear Hacker McWobblegut several rows behind me.

I realize I have to pee.

I had asparagus for lunch. Asparagus. On the day I’m going to see Titanic.


Titanic is three hours and fourteen minutes long. And I plan on staying through the end credits for the Celine Dion song. If I don’t pee now…and all that water onscreen…It’s gonna be a long three and a half hours.

So I get up and run to the bathroom. I pee superfast. I wash my hands superfast, despite my firm belief in the fifteen-second rule.

I text September Adams to let her know I'm seeing this without her because we're separated by an ocean of land.

I wonder what the hell is so pokey in my purse.

Have I missed the announcement to put them on?

I run back into Imax.

I haven’t missed anything. Lights still on. CinemaRadio still playing.

A few weeks ago when I went to see The Hunger Games, the theater accidentally started playing The Lorax instead. It caused so much tension that one audience member actually volunteered as tribute.

At least, that’s what I assume has happened. My brain is on fire. My jaw rattles. I can’t focus on anything. Silver light pours from the screen.

It’s an ad explaining how amazing the sound is in this theater.

Too bad I’ll never hear anything ever again.

I have been deafened by digital surround sound.

The glasses announcement appears, and I put my glasses on with shaking hands.

The ringing in my ears fades. The movie starts.

I keep taking my glasses off and putting them back on through the opening credits to try to see the difference between 3D and regular D.

I realize I have to pee again.

I’m glad I saw Titanic in 3D. I thought the inside of the ship looked awesome. People…not always so much. Crowd scenes were kind of awkward. Dinner scenes, though? Two thumbs up.

My real question was, Would the 3D be distracting when the ship was sinking?

Would I be put off by the Man-Who-Intends-to-Go-Down-as-a-Gentleman-but-Wants-a-Brandy-First’s weird 3D hand? Would Victor Garber’s death be less potent because items in the foreground were out of focus?

I loved the 3D ship-saster. Ropes snapped and hit me in the eye. Flying ship pieces landed in my lap. When old Rose dropped the Heart of the Ocean into the sea, it fell right on my face.

And yeah, the picture was amazingly crisp. And my chair rumbled. Thanks Imax.

I stayed for the Celine Dion song. Then I hurried out and peed.

My hat is off to you, Hollywood. I shall permit you to force the word “experience” onto my experience. For now.

Though I must say it didn’t quite live up to the expectations I had after seeing this trailer:

A note: I was journaling at the time the sound ad came on, and this is a picture of what I wrote in that moment. 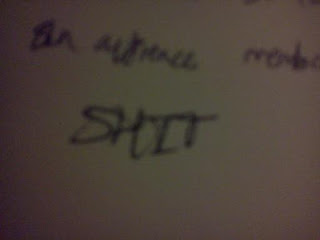