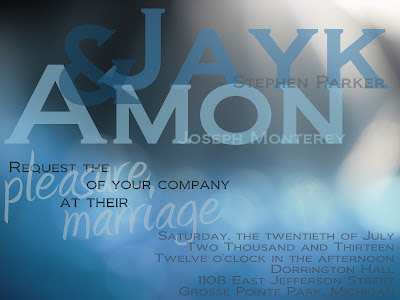 I am so excited to announce that The Brat-tastic Jayk Parker, sequel to Wacky Wednesday, is officially a go! Thanks to MC Blackman for designing a wedding invitation for my boys Jayk and Amon, so I could announce this book in style.

Because yeah, Brat-tastic takes us down Jayk and Amon’s somewhat, um, rocky road to the altar.

The sequel picks up a year after Wacky Wednesday left off, as Jayk and Amon are preparing for their very small, very simple wedding. They’re totally happy to be getting married. Absolutely 100% utterly and completely sure this is the best possible choice they could have made at this point in their lives.

Except…okay, maybe once in a while the doubts creep in. But that’s normal, right? Not doubts about their love for each other or about the validity of their relationship. Just doubts about standing up in front of everyone they know minus the people who won't come because it's a gay wedding and enacting a ceremony with hundreds of years of often oppressive tradition behind it and a somewhat intimidating statistical non-success rate during which they’ll publicly promise that they can love and take care of each other forever.

Still, they couldn’t be happier.

Until they arrive in Grosse Pointe Park for the wedding and meet Ron and Jennifer Gaines-Brake, a rude, perpetually bickering couple who’ve pre-hyphenated their last names, and whose wedding is the day after Jayk and Amon’s at the same venue.

When Jayk and Amon are drawn into the Gaines-Brakes' drama, their own doubts and fears about marriage are magnified. And when they accidentally switch bodies with Jennifer and Ron the day before the wedding, their simple, stress-free celebration starts looking like a nightmare.

Brat-tastic is scheduled for release in June, which is quite a while from now. But it worked out nicely, because a couple of days after I sent the manuscript to my editor, Loose Id announced a June special call for wedding-themed novels. So we decided this one would be a good fit for the “I Do…Unless I Don’t” theme.

So what am I going to be up to in the meantime?

I’m querying my editor with another novel right now. This one’s dark, violent, and has been a pain in the butt to write. It’s funny how different the writing process is for different books. It took me about a month to get a draft of Brat-tastic done, because Jayk and Amon are such easy characters to work with, and they basically write their own story. This dark, violent one has been in the works since January, and it’s just one problem after another. But the first draft is about 20,000 words shy of being complete, and once a rough draft is on paper (or on MSWord Document), it’s usually easier to see what needs to be done to make it less…horribly painfully relentlessly rough.

AND there’s something else. I may or may not be co-writing a novel with a certain ultra-awesome author (I am). It’s an incredibly fun process, and one that really keeps the creative juices flowing. It fills my writing days with purpose and giddiness—even more giddiness than usual—and the collaboration eliminates those I’m-stuck-and-can’t-go-on moments that have kept me working on a certain other aforementioned manuscript for nine months. We’re writing at breakneck speeds, and I hope to have more to share with you on that front soon.

So that’s my long update. The Brat-tastic Jayk Parker, coming to a virtual bookstore near you in…it feels like forever...okay, nine months. Less than a year. It’ll fly by.
Posted by J.A. Rock at 10:03 AM