When I was six, my mom brought home a picture book from the library. It was about a baby whale who disregarded his mother’s warning, swam too close to the shore, and was beached until a little boy helped him.

My mom said the author of the book was six when he wrote and illustrated it. I think she thought that would be a cool thing for me to know. Like I’d feel a sense of kinship with the author: I was six. I liked writing. And marine life.

“How did he get published?” I demanded. My own picture book, Diver the Small Dolphin, about a dolphin who was very small but could still jump through hoops, had most definitely not been published. It was not available at the local library. Who the hell was this boy who'd made it before he left kindergarten?

My mom tried to explain that the boy probably had a relative who worked at a publishing house—that he almost certainly hadn’t sent out a query, landed an agent, and scored a six figure advance. But I wasn’t in the mood to hear it.

The little bastard had published a book. And I hadn’t.

I thought about him occasionally over the next few years. When I was ten I wrote The Great Pet Adventure, about a family who moves to Virginia but leaves all their pets behind. The pets then have to find a way back to their humans. It was a bit of a Homeward Bound knockoff. I could do better. When I was twelve there was Let’s Go to Europe, about a zany group of friends who go to Europe and get kidnapped. There was a character named Rachel Green who had a stylish layer cut. I really liked Friends.

After that there was a slew of projects, ranging from YA to literary to romance to sci fi, most of them abandoned, a few completed, sent out, and rejected by agents and publishers. Every now and then that kid and his whale book would pop into my head and I’d burn with fury.

Last year, after By His Rules was published and all my dreams came true slash I realized I was exactly the same person just with way less time to relax, I tried to look up the book. I typed “6 year old beached whale” into Google and got a picture of a humpback whale—presumably age six—stranded on the Manzanillo shore. I seemed to remember the name Joshua was involved, so I tried “Joshua and the Whale.” Did you mean “Jonah and the Whale?” Google asked.

Had the book ever really existed? It must have. That kid was how I learned to hate people who were more successful than me. He was the one I voodooed when I couldn’t think of a good ending for The Great Pet Adventure, or when Harlequin told me Hellbound was really not what they were looking for. He was a phantom, this child prodigy, eternally six, always just out of reach, laughing at me as I struggled to achieve my dream. But where was he when I typed “six-year-old whale book” into Amazon and got a book on Orcas that had been published in 2006?

I wanted to know the kid’s name, wanted to know what he was doing now. Wanted to hear him admit he’d only been published because his uncle worked for Random House and this was his uncle’s version of putting his drawings up on the fridge.

Two days ago, I tried searching again. I actually found it pretty quickly. The book is called Joshua Disobeys, and it was the winner of a contest for writers ages 6-9 in the 80s. The author’s name is Dennis Vollmer, and he still holds the record for youngest male author ever published. The youngest female author was four, and if I’d known about her when I was a kid I would have tracked her down and poisoned her Lunchable. Except I think she lived in the 1940s or something.

I hope you’re well, and that you are doing something you love, even if it’s not writing. I am doing what I love best, and it’s partially thanks to a six-year-old kid who won a contest years ago. And that’s why I love writing so much. When we share our stories with the world, we don’t know whose lives we might affect, or how.

There’s a scribbly marker drawing of a baby whale stuck on a beach. And somewhere there’s a six-year-old girl on her staircase looking at that picture and wishing more than f’ing anything she was the author of a book other people could read.

All of us, at times, lack subtlety and a sense of perspective. So today, Dennis, I’m offering your voodoo doll a tiny doll-sized olive branch, and I’m buying a copy of Joshua Disobeys. 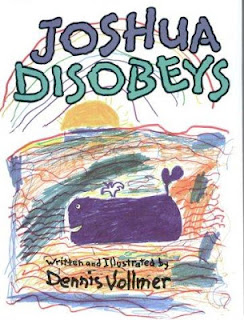