Meet the Girls of A Kind of Magic

Sometimes I don't know what to blog about. I tell myself I could blog about what I'm currently writing, then I laugh heartily and dismiss the idea.

If I blog about my WIPs, I might treat them as though they're real books that are actually going to happen, which will immediately make me want to stop working on them.

I work on a lot of things at once in order to head off the THIS IS AWFUL freakouts. When I freak out about one project, I just work on something different for a while.

But I feel far enough along in my first F/F book, A Kind of Magic, to talk about it a li'l.

Trouble is, lately Jem's been wondering what it would be like to explore her Domme side. But Tara's no switch, and getting to dom her Domme is seeming more and more like a hopeless fantasy for Jem. Until Jemma jokingly attempts to hypnotize Tara onstage--and it works. Suddenly Jemma's got a willing sub at her beck and call and has to figure out how to undo the damage--unless they can both agree it's not really damage... 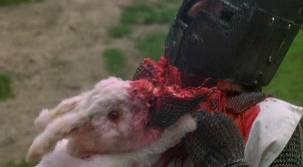 So if I don't freak out and stop working on it, I'll be polishing this one up soon and looking for a home for these girls!