Sequelpalooza: Which Wacky Wednesday Characters are Coming Back for More in The Brat-tastic Jayk Parker?

The cover is here. Look! 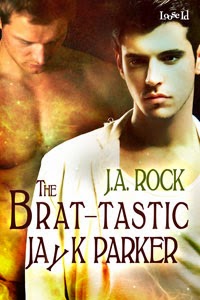 Beautiful work from Fiona Jayde. And I get another falling-down Y! Blurb time?


A year after the body swap that let brat Jayk and his dom, Amon, experience each other’s lives for a day, the pair is ready to be married in a small, stress-free ceremony. Things are going smoothly until they meet Jennifer and Ron Gaines-Brake—a quarrelsome couple with a laundry list of troubles whose wedding is at the same venue. When Jayk and Amon are drawn into the other couple’s drama, their own doubts and fears about marriage start to surface. And when they accidentally switch bodies with Jennifer and Ron the day before the wedding, their simple, stress-free celebration starts looking more and more like a nightmare.

BTJP will be out June 4th from Loose Id, which is less than two weeks away, which I feel totally calm about.

The Brat-tastic Jayk Parker is the first sequel I've written. It’s a follow up to Wacky Wednesday, which was about a miscommunicating D/s couple who switch bodies for a day. Writing BTJP was quite fun, because the world was already there, I already knew the characters, and Jayk and Amon were 116% on board with the idea of relaying the next chapter in their lives. But it was at times a bit of a challenge to decide which side characters got to come back, and who had to be sent packing.

-Beth, Connor, and Stephanie. Jayk’s best friends and Beth’s yoga-loving girlfriend were at each other's throats for most of WW. Getting along much more harmoniously now, the three return in BTJP to throw Jayk his wedding shower, plan his bachelor party, and help dec the hall.

-Allen Ginspurr. I promised J&A’s cat a bigger role if there was ever a sequel. He is a more significant character in BTJP—unfortunately, significant mostly by virtue of his absence.

-Bernard Witmeyer. Amon’s top pick for a job at his firm in WW and Jayk’s archnemesis. It pained me to turn down a Witty cameo, since he is so skilled at antagonizing Jayk. But there was no room for the World’s Most Qualified—and Douchiest—HR Candidate in a wedding story. Maybe next time.

-Coworkers. Amon’s coworkers are reduced to passing mentions, except for Carol Blean, who gets to have a little fun. And Jayk's days at the community college library are over, so goodbye to Carrie and Grogasshole.

-Ron and Jennifer Gaines-Brake. Jayk doesn’t need Witmeyer to make his life hell in BTJP. He’s got his hands full with this pre-hyphenated couple, who are getting married the day after Jayk and Amon at the same venue. Jayk is particularly offended by the complete mess they make of loving each other, and by Ron’s polo shirts.

-Johnny Brake, Pet Detective. I’m not even going to say anything.

-Officer Gudd. A local police officer obsessed with catching the elusive Hancock Hills Hose-Splitter. Who may or may not be Amon, as far as Gudd’s concerned.

More to come on the BTJP front. BTJP will also be featured on the Big Gay Wedding Tour, a collection of m/m Loose Id authors who have wedding-themed books coming out in June. Stay tuned.
Posted by J.A. Rock at 12:18 PM