The Brat-tastic Jayk Parker is Here, and the Big Gay Wedding Tour Begins

The Brat-tastic Jayk Parker is here! Right now it is available on the Loose Id site, but I will update as it becomes available from other distributors. 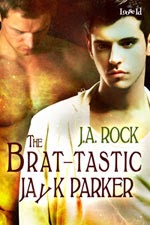 Check out an early review from the Blog of Sid Love.

Want a chance to win a copy? I'm giving one away on the first stop on The Big Gay Wedding Tour, Joyfully Jay. I'm over there today talking about how my love for P.G. Wodehouse influenced the Wacky Wednesday series. Leave a comment for a chance to win.

The Big Gay Wedding Tour continues this month with these authors and these books at these places. We'll be doing lots of giveaways!

If you're interested, check out my pre-tour stops at Jessewave and Lisa Henry's blog.

And if you liked The Good Boy, voting is going on now at Sid Love for Book of the Month nominees, and The Good Boy is on the poll. You can vote here.

Lastly, here is an excerpt from The Brat-tastic Jayk Parker.