It was in Savannah, a city I’ve been obsessed with since I stumbled upon a copy of Midnight in the Garden of Good Evil a few years ago. I roomed with Jay of Joyfully Jay, and we decided we should probably take a Segway tour of the city before the con started. I told my mom I was doing that, and she said, “Why don’t you wear a fanny pack while you’re at it?” 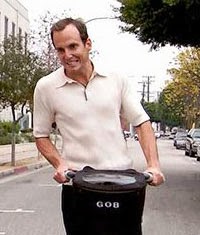 Okay, so it’s hard to look cool on a Segway. Unless you’re Gob Bluth. But I was pretty blown away by the sheer sexiness of this picture of us in our helmets. We are also—though it may not be evident--sweating profusely in this photo. And profusely would be an understatement. Savannah’s a little warm this time of year. 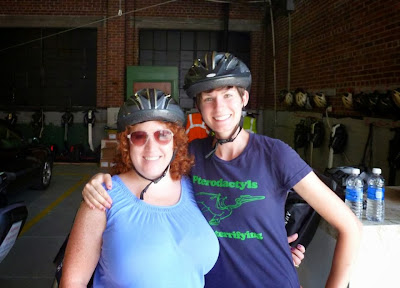 Some of the panels were really cool. I liked learning about zombies, muses, why there’s not so much LBT in GLBT romance, and more. I also got to meet fellow m/m authors Anne Tenino, K.C. Wells, Tibby Armstrong, Kiernan Kelly, B.A. Tortuga, Julia Talbot, Lori Toland, and Brien Michaels, as well as Sarah Frantz, Rachel Haimowitz, and Stephanie Grober of the Riptide crew and the ladies behind Less Than Three Press. And lots of other fun people. Anne crocheted a beautiful rainbow colored penis and gave me a book!

My fangirl writer crush Katey Hawthorne was there as a featured author, and did an awesome job helping to sponsor the Elementals Ball, where I got a picture with these two girls whose costumes for every single party were SO GOOD!!

The night of the carnival, I raced Jay and Brien Michaels on the bouncy castle obstacle course. It was some serious Legends of the Hidden Temple shit, and I managed to rugburn the tops of both feet going down the slide on my knees. The wounds goozed for a couple of days. On the third day, Jay helpfully pointed out that they looked pretty infected. So I am now home treating wounds sustained on a bouncy castle. If that doesn’t speak to a successful con, I don’t know what does. I also got to gently nipple-fondle a cardboard cutout of Ian Somerhalder.

The night of the Vampire Ball, there was an accidental recreation of the Bridesmaids movie poster. Definitely my favorite picture of the weekend.

Kiernan Kelly gave Jay a little monkey-with-penis keychain that I had to hide my envy of. Apparently I didn’t hide it very well, because Kiernan went and got me one too. Then we made the monkeys do this. 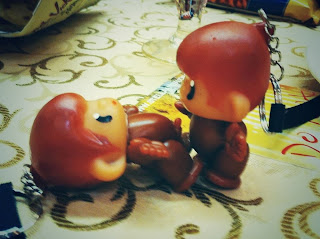 Okay, so maybe it sounds like I didn't do much networking/professional stuff this week. And that's true. But I did learn a lot. And besides, monkey penises! Also, Lisa Henry and I got a contract on a new book, which I'll be telling you about soon. And we just got an idea for another book, which we're plotting right now, so I'd better go...
Posted by J.A. Rock at 4:03 PM