DD in Real Life: an Interview with Michelle and John

Some of what Michelle talks about in this interview, such as sexual punishments and learning to claim a sense of entitlement as the dominant partner, are part of the D/s portion of their relationship, and wouldn’t fly with most traditional definitions of DD. But other elements, such as using discipline when John violates house rules, fit with DD. As per the discussions this week, there’s no one-size-fits-all way to do DD. But Michelle, John, and I did want to make that distinction.

Please join me in welcoming Michelle and John to the blog for a dose of RL spanking!

Thank you two so much for agreeing to do this. I’d like to start by asking you to describe your relationship a little bit, just so we have a sense of how things work for you two.

Michelle:  Most days of ours are filled with family activities, careers, and everyday things that consume most people’s lives.  John is a very strong person who has his act together.  Yet, we have a domestic discipline aspect in our relationship that is built on mutual agreement and respect.  We both have an interest in spanking but John has agreed to accept punishments from me when I determine he deserves it.  When John exhibits and attitude, arrives late, or violates one of our house rules, he knows that he will most likely be punished as I see fit.  This approach helps reduce friction between us and built up frustrations.  Domestic discipline also requires a high level of trust and communications to make it work well.

John: It also only works because I fully trust Michelle and her judgment.  She is fair, thinks about what else I might be going through and works to make me a better person. It also works because Michelle is innovative but consistent.
Michelle, what is your favorite part of taking control?

My favorite part of taking control is getting everything I want without feeling guilty.  In previous relationships, I felt pressure to perform.  If a guy was doing something for me that felt good, I was very aware of the time and knowing that I was expected to reciprocate afterwards.  Because John has agreed to this, I can enjoy what I like for as long as I like, guilt free.  That has increased my enjoyment significantly.

I also like the fact that John is willing to try new things for me, especially when he doesn’t particularly want to.  For example, I make him “manscape”  all the time.  He used to freak out about having a razor near anywhere other than his face, but now he is well groomed. 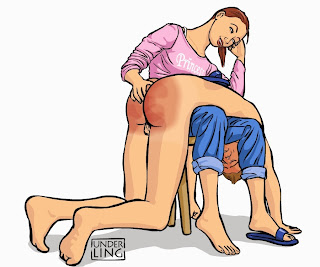 John, you participate in a lot of humiliation play, and you submit to non-erotic punishment for real life infractions. What do you get out of it?

Discipline puts me in my place, taking me down a few notches.  As someone who has had considerable power for a long time, having to submit and be punished in ways I don’t like has been instructional for me.  I don’t like it at the time, but it helps me with my self-discipline and helps me keep my ego in line.  It has made me a better person.

Humiliation is something that I may not like at the time but is powerful later.  I can’t explain why because many of the things that Michelle has required of me are mighty embarrassing; I am usually a very private, modest man.  I know that J.A. may not believe that with what she has seen.  Yet, humiliation play takes me out of my comfort zone, gives me an incredible shot of adrenaline and somehow excites me later.

I do believe it! It just makes your submission all the better. Michelle, is it hard to come up with punishments for John? What punishments do you use besides spanking?

Coming up with punishments is a lot easier than it used to be.  I’ve learned of ideas online and some actually came from John when I have him search the web for me.  Once I made him take cold showers for a week.  I have also restricted his ability to touch himself or climax for extended periods of time.  Other punishments include enemas, enforced bedtime, writing essays, and listening to music or watching movies that I have chosen.

Sometimes I make him do things for my amusement.  This can be anything from making him insert a buttplug while at a restaurant to rubbing my feet.

What’s your favorite punishment you’ve ever given?

Michelle: It’s hard to choose just one. I enjoy spanking him, but he can take a good spanking. Therefore, if I really want to change behavior, I must pick something he does not like. A good punishment enema (usually two quarts of warm, soapy water from a red bag) works well.

John, you’ve written some spanking fiction. How, if at all, does your portrayal of discipline in your writing differ from your experience with discipline in real life?

For years, Michelle let me “top from the bottom,” allowing my idea of punishment to equal her approach.  But as Michelle grew in her techniques and ability to take power, she doesn’t allow me to have a say in my punishment.  Warm ups, for example, are a thing of the past with true punishment spankings.  Different positions are often used, such as having to hold my knees and keeping my butt out while she uses the “Betsy paddle,” a mean sorority paddle across my bare butt.  It hurts!  The idea of a set ritual isn’t the way Michelle likes to discipline so I never know how I will be spanked or if other punishments might be used instead or in conjunction with her spankings.  She no longer just uses spanking, paddling, strappings, corner time and punishment enemas.  She has become more innovative with things like cold showers, occasional early bed times and longer periods of chastity.

Michelle: I think this stems from a fear of having an abusive, controlling relationship.  I do see degrees of these types of relationships in people I know.  Sadly, my relationship with my best friend and cousin has been reduced to seeing each other twice a year because her husband is the primary money maker and uses that to control her.  We don’t even talk on the phone when he is home.  I’ve also experienced one unhealthy relationship where my significant other was selfish and verbally abusive.  Unfortunately, I think this is common.

With John I am able to do things with my best guy friend Stanny.  I can go on trips with my girlfriends.  I can get a master’s degree.  I can work as late as I need.  Surprisingly, I know many professional women whose husbands won’t allow them to go out with male friends, go on trips with girlfriends, and who do not support work or education.

Additionally, I would never use domestic discipline to control or harm John in a real way.  I love him and fully support his relationships with family and friends (including other women), his career, and his happiness.

What’s the most challenging thing about your relationship?

I also found overcoming guilt was challenging to me.  Early on, I used john all night sexually without allowing him to climax despite the number of BIG O’s he gave me.  The next morning I about died, realizing that he had never climaxed.  Now, I will use him in that way for days upon days and find it enjoyable because I’ve replaced guilt with a sense of entitlement.

“This document reflects the shared vision of Lady and subbie, outlining rules that will guide their behavior and relationship.  It was written after considerable discussion to frame their positions, assure that all actions described therein are consensual and display their immeasurable love. This agreement assures that there is mutual respect, although not equal power…. All parties of this agreement are equals; Lady is just more equal than subbie.”

So for you, what does it mean to be equal? How does mutual respect coexist with a (consensually) skewed power dynamic?

Michelle: John and I are ultimately equals.  It is his willingness to submit to me and our mutual love and concern for each other that makes it work.  He does not like or enjoy everything I make him do, but he is willing to do most of it.  We are able to communicate what works and what doesn’t work.  Over time, the list of what we do has expanded exponentially.  If I someone had told me ten years ago that we would be doing this, I never would’ve believed it.  It has been a learning process too.  There have been misunderstandings, particularly one time when we were communicating via text.  Luckily, we are able to learn from these episodes.

I would also like to add that getting what I want has really been about what I want, but within his limits.  I once met with a Domme who has men come over to serve as maids.  Some of these men complain because she wants them to wear something other than the maid outfit, which they prefer.  She said that these men were not really willing to submit because they were trying to get what they wanted.

John, which is more terrifying, the pictures/descriptions on this blog http://strictjuliespanks.blogspot.ca, or this shark? 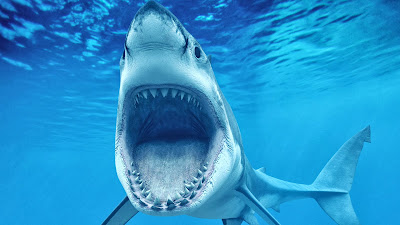 John: Julie is definitely more terrifying!  Like when Michelle has decided I am going to get a night of punishment, Julie’s approach is dying by one biting blow at a time.  The shark’s approach is at least fast – one gulp!

Thank you so much for being here today. Any advice to people who might be about to embark on their own D/s or DD relationship?

Michelle: I think the most important thing is to first make sure the relationship is healthy and there is good communication.  Starting off slowly would probably be good.  John and I took ten years to get to this point and there was a lot of trial and error.  We have tried things that did not work the first time, but worked well after trying again.

There have been blunders.  John once tied me up and then fell asleep.  Another time I tried wake him up to do a role play and thought he was resisting as a part of the play and it turned out he was really sick.  I would also make sure that it is working for both parties, and not just one person “tolerating” this for another without getting some satisfaction.

John: I agree with Michelle (Now you know why this approach works for us.).  [Humor intended.]

Seriously, Michelle is right about communications.  It is important that the couple set aside special time to talk, share and listen.

Share your thoughts with Michelle and John, and feel free to ask any questions of your own! And leave your comments on previous DD Week posts with Cara Bristol, Pauline Allan, and Fabian Black for a chance to win books. DD Week will continue tomorrow with an interview and giveaway from Lori Toland!
Posted by J.A. Rock at 2:00 AM