Kay Berrisford Gets Real About Spanking: A DD Week Interview 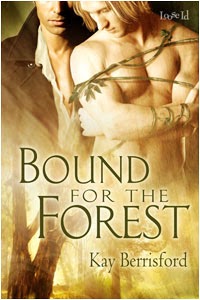 Kay Berrisford is back on my blog today! It’s the third time I’ve forced—er, invited her to visit, because I so enjoy her work. Kay’s characters don’t have DD relationships, since they’re usually busy fighting epic internal and external battles in far away lands during long ago times. But there’s always some spanking in her work, and sometimes elements of discipline. I knew Kay would be a good person to talk to about…well, spanking. She’s also giving away a title of your choice from her backlist.

It feels sooooooooooo good!  Lovely squirmy, burny, slappy, gaspy fun. Um, okay, that’s not a very useful answer for the uninitiated. I love writing spanking, because to me, it can be a teeny iteration from sex itself, another form of lovemaking. Finding the right language to evoke all those wonderful sensations of pleasure and pain, and how both can be equally good, is a juicy adventure —and of course, you can orgasm from a spanking, and not just in fiction.

I enjoy describing spanking most from a sub’s perspective, but find it fascinating from both (or more) participants’ viewpoints. In my books, spanking often comes at a climactic moment in the plot, when the two protagonists can’t or won’t admit their growing bond and the tension is simmering toward breaking point (see Bound for the Forest and Bound to the Beast!) The spanking sends those characters on a roller-coaster ride of emotion, at the end of which they can’t help but have transformed—or at least shifted— their understandings of each other’s needs and the connection between them. Spanking can be so wonderfully intimate.

Oh, and it’s hot, and soooo carnal. What’s sexier than a naked sub squirming over a dom’s lap? Added bondage is fun but optional for me. I love the squirming. Can ya tell?

Your characters often survive abusive situations, and I know you’ve mentioned this sometimes interferes with their ability to enjoy kinky games. What are your qualms as a writer about having abused characters engage in consensual kink? Any plans to write a story where no one’s been tortured and so there are no barriers to the characters enjoying pages upon pages of fun-time kink?

Haha, yes, this is a bit of an issue. In Lord of the Forest, I tortured Cal (and Robin) to hell and back. Though their future relationship was screaming out to be DD, and I wrote a scene hinting along those lines, I knew it would take a very long time for them to be in the right place mentally (plus, the story is set in the thirteenth century, so they wouldn’t have all the modern reference points of BDSM to help them understand and rationalize what they wanted.) That said, they totally lived happily ever after in DD heaven in my imagination.  If I ever write a sequel, maybe I’ll explore that. How the heck would a medieval DD relationship work, when everyone around is, er, getting medieval on each other?

Anyway, to answer the rest of your question—yes, I totally need to write some fun-time kink! I think my latest WIP is getting closer to that (involving a prudish warrior-turned-librarian being ordered to find a sex slave for a young and rather brattish king.) There’s some serious angst there, but the fun side of spanking is getting closer.

Sometimes I want to write a story where a character is behaving like a total brat, so the other character just takes him OTK and starts spanking, John Wayne style. But I have too many hang ups about consent, so my spankees always okay the idea of spanking first. On one hand, the romance genre seems like the perfect place to explore fantasies like the surprise spanking. On the other, romance also seems like a genre that asks its lead characters to be more morally sound than characters in other genres—and spanking someone without asking is not cool in real life. What are your feelings on having characters do things that are hot on page but wouldn’t fly in reality?

Oh God, we share a brain/conscience on this one. Spanking John Wayne style sounds totally hot, but I’ve not gone there. 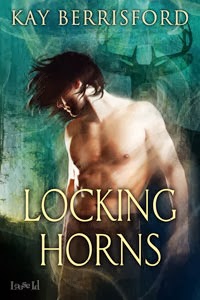 In the climatic spanking scenes I was referring to in answer 1, I usually have the sub initiating the action to avoid this, and it’s not so much about “punishment”—though, particularly in Bound for the Forest, Scarlet is being very bratty and provocative and fishing for chastisement—as that outpouring of pent-up passion and a beginning of unity. When I wrote my second book featuring Bound to the Beast’s Herne and Tam (Locking Horns) the spanking scene comes when the issues are resolved, thus the act wavers between being punishment for Tam’s bratiness and a celebration of their love, and frankly, it’s more of the latter. Plus, Herne had earlier promised Tam a spanking as a reward!  I’d love to write Herne the Hunter doling out a good ol’ John Wayne-style spanking on Tam when Tam’s not begging for it and totally deserves it—however, it’s never going to be totally raw, as those two have already reached a level of negotiated pre-consent.

Would I break those rules and go all out without the pre-contract, as it were? Yeah, maybe. With the right characters in the right place. I’ve not found that place yet, though.

You’re a history major. What has been the most spank-friendly era of history?

Agh, this is where I’m all sad I’m on the other side of the world in Australia rather at home in the UK with my lovely books around me! As far as British history goes, the Georgians were totally into spanking, and we have evidence of brothels catering to those needs from at least the eighteenth century onward (there might be some evidence from the Restoration period too, but don’t quote me on it!) I’ve read somewhere about posture girls, who were paid to show off their bottoms to be spanked, and Georgian porn was also rather bottom and spank friendly. And then there were the Victorians and their public schools and their canes (see below…)

To be honest, though, there’s probably some sort of historical correlation between the decline in real and nasty corporal punishments and the amount of people working out that some forms of “chastisement” can be fun. So I’d say today’s probably the best time for a good spank!

Woohoo! You heard her, everybody. Go out and get yo bad self spanked!

As a historian and a resident of the UK, can you explain to me the British infatuation with canes? I love it, but British spanking videos are so funny to me, because regardless of what the spankee has done, whether they’ve hijacked a train or snuck a bit of chocolate before dinner, it’s always like, “SIX OF THE BEST.”

Oh, heavens, it’s all about our repressed public school fantasies (public schools being, conversely, the very expensive private schools of our glorious isles, the most famous being the ancient institutions of Eton, Harrow, Winchester, etc.)

Okay, so back in the “good old days,” public school boys would get the cane when they misbehaved. Yes, you know this bit. SIX OF THE BEST. My “other half” started at public school preps in the dying days of such traditions (the 1980s) though the punishment threatened there was the slipper, and he was never naughty enough to experience this.

The cane, however, is just the icing on a big, current stuffed cake of public schools’ repressed homoeroticism, and frankly, BDSM-saturated traditions. For example, it wasn’t just the school masters who got to dole out the spanking. So the legends tell us, older boys (often prefects) would be allowed to take younger boys as their minions (fags) and punish them pretty much at whim, anything from a caning to warming their toilet seat (or bed!)

One of the last classic texts relaying this tradition is Roald Dahl’s biography, Boy. Both my “other half” and I can confess to getting a bit hot under the collar at the lurid caning scenes when we read this book as kids. Yes, it is a children’s book, but many a good British children’s school story contains bare arse spanking scenes.  And you wonder why we turned out so odd!

I love Boy! And not just for those scenes, I swear…

Yes, I think so.  I don’t have a DD relationship, as it’s not a dynamic that suits me and my partner, but it is something I would consider, most likely with another woman (though it’s kind of interesting that I say that, because I seem to have removed the dynamic of gender difference to make it easier for myself. Seeing as I believe in loving the *person* rather than their gender, it shouldn’t matter what they identify as, should it?)

Spanking, as you say, doesn’t have to be erotic, and it’s the spectrums of emotion/responses it evokes that render it so compelling.  If you’re not finding it pleasurable, spanking can make you feel humiliated and small, and at the same time, safe and comforted.  The sensations, whether pain or just the rude awakening, can maybe pull you back from an extreme emotional state you didn’t want to be in but couldn’t escape from alone. In a pre-negotiated situation—where both partners have agreed these are power dynamics they want to visit—I think spanking could be part of a healthy relationship, both as titillation and as a form of chastisement/comfort.

Very nice. I love that juxtaposition--that something humiliating can also be comforting. 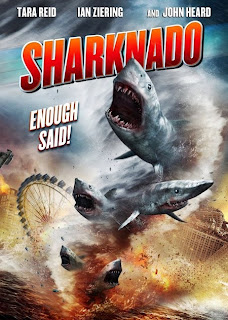 A sharknado is coming, and you’ve been invited to a secret shark-proof shelter, where you will have to stay until Ian Ziering starts jumping into sharks’ mouths and cutting them open with chainsaws. You can only bring two books with you. What do you bring?

Oh, can’t I bring my kindle? Hmmm, okay, that’s probably cheating, plus the battery might drain down the electricity supplies in the secret shark-proof shelter.

Yeah, your kindle battery is dead. You forgot to charge it before the sharknado hit.

Okay. This is hard. I guess I’d pick one big fat old classic I’ve not read for a bit (maybe Vanity Fair? Or even Lord of the Rings?) I’ve not read enough looong Russian novels or plays, Chekhov etc., but they’d probably get me so depressed I’ll go throw myself into the nearest pair of chompy shark jaws. So yes, choice one…*makes decision*…Bleak House. It’s nearly brick-like enough to wedge some shark mouths apart with.

Choice two. Something hot with some emotional punch. Haha, maybe The Good Boy? Ooooh, no, can I have J.A and Lisa’s new one, then I’ve got something I’ve not read, so I can stick in my earplugs, blot out all the screams and munching from without, and have a good read?

Lisa and I need to find a way to blurb this on the back of our next book. “If a sharknado was coming and I could only rescue two books, I’d pick (insert Lisa's and my title here once we think of it)…also Charles Dickens.” –Kay Berrisford

Kay has even shared a picture of her sharknado-proof shelter (aka the Melbourne Aquarium). 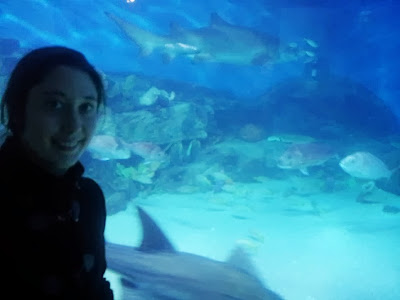 I'm glad you survived long enough to do this interview, Kay. It’s always a pleasure.

And now, comment on this post for a chance to win one of Kay's backlist titles! The contest will close at 11:59 p.m. EST on August 12th. To find out more about Kay and her books, check out these links: