Lisa Henry is a Nice Person and Australian Words Are Real: A Public Apology

Given how publicly I have, in the past, declared my disdain for certain Australian words and phrases after working with Lisa Henry, it seems only right that I make my apology public as well. You see, up until this point, I have enjoyed poking fun at Australia's "made up" words. At their dating and measurement systems, their seasons, and their way of spelling things. I have scoffed at concepts like the "Freddo frog" and the "bottle shop." Even earlier this month, when Lisa was a guest on this blog, I slipped a somewhat snide comment into her introduction about her tendency to promise me imaginary chocolate. The lack of Freddo frogs in my life was, I assumed, proof that they were made up. Like didgeridoos and lemurs.

I am here today to admit that I was wrong. You see, Australian words are very real. Just as real as American words, if not more so. Whatever I may have tweeted or facebooked or blogged in the past, I understand this now. And I want to offer my most heartfelt apologies to Lisa Henry and the great nation of Australia.

To show how sincere I am, I have compiled a list of specific things I would like to apologise for. Australia...I hope you're listening.

J.A. Rock's List of Apologies and Concessions to Australia

-"Firies" is a good word for firemen.
-You probably do not actually call graham crackers "foodle doodles."
-Your national vocabulary does not sound, as I once proclaimed, "like a Dr. Seuss book."
-"Jelly" is a totally legitimate term for Jell-o.
-I would love to park my car in the car park.
-I support you in the de-sexing of all your pets.
-I will take one flat white, please. Because that's coffee--not paint.
-I will pay for my flat white with a note. Or notes. (I don't know how many notes it will cost).
-Your way of dating things makes total sense.
-Why not have summer in January?
-Gas is when you fart. Petrol is what you put in your car.
-There are more than three Australian actors of consequence.
-I realise that if we keep overusing the letter Z it will no longer be the most coveted letter in Scrabble. So let's use S's where we can.
-Celsius!!!

I hope, Australia and Lisa, that you will accept my apologies. Differences make the world go round. And the International Date Line is not some longitudinal TARDIS that causes Australians to time travel. Australian, American...we're all just people, existing on opposite sides of the planet, on different days of the calendar year, but eating the same jelly and tossing the leftovers in the same bins and using the same portaloos. Figuratively speaking.

And now, I'm off to finish the bag of Freddo frogs that arrived in the mail today from Australia along with the Mark Cooper Versus America contract. 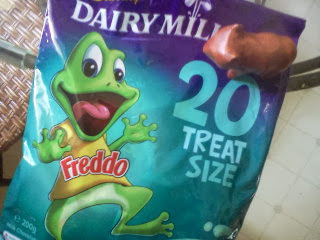 Email ThisBlogThis!Share to TwitterShare to FacebookShare to Pinterest
Labels: experiences, Lisa Henry, righting the injustices of ages past, Updates