Okay, I’ve been a little discouraged so far with the amount of time devoted to megalodons this Shark Week. They’re extinct. Unless Steve Alten is onto something.  Nerds McGee over here wants more educational documentaries about actual living sharks, less Sharkzilla, please. I miss the Shark Weeks of yore. And I miss Discovery Channel before it was all Amish Mafia and Gold Jungle.

Shark Week 2006. There was a program about Great White cage diving in Gansbaai, South Africa. I really, really wanted to do what the guy on the program was doing. A year later, I went to South Africa, and started looking for someone who would put me in a cage and throw me in the ocean. Turns out, if you’re willing to pay, plenty of companies will do this for you. I got put in one of those surface cages with a snorkel, and a marine biologist—who I saw on Shark Week a couple of years later!—lured some great whites to the cage. We saw five great whites that day, and most of them came close enough to touch. Except obviously we didn’t touch them because they could bite your hand off and their skin is made of razors. And they were adorable, as long as their mouths were shut. One of them bit the cage—while I wasn’t in it, thankfully. They’re a lot less adorable when they do that.

Last year, a honeymooning diver in South Africa was in a surface cage when a great white started trying to bite through it. In retrospect, I’m not sure the diving was the smartest idea I’ve ever had. But it’s one of my favorite memories. Though you’d never know it looking at pictures, because I was seasick on the boat and look miserable in every photo. I also had my wetsuit on inside out. And I was super afraid to pee in the water because I didn't know if Great Whites were attracted to urine or just blood.

So hopefully Shark Week will get a little less megalodony in the next few days. In the meantime, you can test your Great White knowledge with this quiz. And you can get ready for another DD Week interview with PaulineAllan in just a little while! 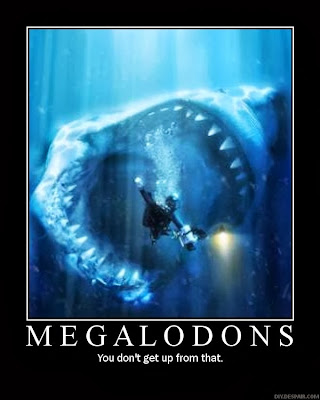