All right, so the Shark Week premiere, Megalodon: Monster Shark Lives, was pretty disappointing. But I thoroughly enjoyed the DD Week premiere here with Cara Bristol (there's still plenty of time to enter her giveaway below!) And you know what's not disappointing at all? The amazing Fabian Black is here today. Fabian is my hero for unapologetically focusing on the discipline aspect of her characters’ relationships. There’s romance, there’s sex, but the spotlight is on the spanking. Her stories are sweet, poignant, and thoughtful, and I’m delighted that she’s stopped by for an interview.

What a lovely, and flattering, introduction. Thank you for such kind words. It’s nice to be here. Before we launch into the interview let me just make clear that I don’t pretend to be an authority or expert on anything, let alone DD, or sharks. I have views, personal opinions and lots and lots of thoughts. If I manage to step on anyone’s toes while expressing my thoughts then please do forgive me. I never intend to offend. Okay, hit me with the paddle, er, I mean the questions.

I am also not an expert on either, though I do know quite a few useless shark facts :) But your opinions are completely welcome. Ready? Bend over.

I’ve always preferred to concentrate on the emotional workings of my characters' minds rather on the physical workings of their bodies. ;-) Aside from telling what I hope is an engaging story, my core interest lies in exploring the discipline dynamic and also in exploring human nature. Why do some people need and want discipline in their lives? What purpose does it serve for both giver and receiver?  What does it bring to a relationship? How does it play out for different people?  Discipline or the potential for discipline forms the erotic essence of my stories. It represents a powerful manifestation of love and trust between two people. Eroticism isn’t necessarily about the act of sex.  It might lead to sex, it might be an aspect of sex, but it’s also separate from sex. Eating a ripe peach or watching someone else eat a ripe peach can be an erotic experience, even if no one takes his or her clothes off.  The peach skin is sensual to touch, the flesh beneath is soft and yielding, the flowing juice is aromatic and sweet on the tongue and so on. To be honest I don’t think I’ll ever write graphic erotica. It isn’t my style. I don’t think I have the requisite skills set for it.

Wow. Peaches just got sexy. Would you define most of your submissive characters as brats? What makes a brat a brat?

I have mixed feelings on this. The word ‘brat’ has so many negative and often unfair connotations attached to it. It’s often used as a pejorative term. With that in mind I prefer to define my submissive characters as people with a wide array of thoughts, emotions and behaviors, some of them mischievous. When I use the term brat I mean it as a term of affectionate endearment. It represents a bond of trust between two people. What makes a brat a brat? Oh heavens I don’t know. What makes a flower a flower? There are so many species and varieties and they all thrive in different soils and climates. Sow at need and according to taste. :)

In the romance world, the complaint leveled at brats seems to be something to the effect that brats need to grow the hell up. Do you see your brats as childlike?

No I don’t, not at all. I see them as adults who might at times have moments where they find it difficult to regulate their emotional responses to particular situations. We all have ‘paddy’ moments when things aren’t going quite the way we want them to go.  Some people are better than others at managing those paddy moments and also better at moving on from them.  In my view it’s arrogant to tell someone to grow up simply because they react to situations from an emotional rather than mindful standpoint.

Look at any romance story in any genre and more often than not one or both of the romantic leads will have a stubborn aspect to their personality. No one thinks to tell them to grow the hell up.  Stubbornness is actually rooted in the child aspect of the personality. Look at toddlers. They have stubbornness down to a fine art. In adults stubbornness can be a positive trait when for example it comes coupled with principle. We all admire someone who holds true to their principles. On the flipside stubborn principle can be a destructive and potentially harmful trait when it clouds good sense and leads to poor judgment and rash decisions. Some people allow the latter to happen more often than is perhaps wise, but that doesn’t make them childish or silly or deserving of contempt. It’s simply a personality thing.

Incidentally, I think adults who manage to retain a childlike aspect to their personality are amazing. It means they never lose the capacity to find wonder in the world, and that is a gift. :-)

Well said! Your subs often have pain in their pasts. My favorite example is bipolar Sam from Destiny Calling, but even Kit from that story and from Kit’s Demerits, despite coming from a more stable background than Sam, has some body image issues stemming from childhood. How do you deal with the issue of a sub’s mental stability in your writing? Can a sub with some serious baggage or a mental disorder safely and fully consent to a D/s relationship?

We all come with some baggage, and it’s a rare person indeed that doesn’t have some issues stemming from childhood to a greater or lesser degree. Childhood is the most traumatic period of human life, even for those from blessedly happy families. We all have some pain in our pasts. To be human is to feel pain. We all acquire junk and hang-ups as we negotiate our way through life.  Having bad experiences and/or suffering from mental illness, such as depression or a mood disorder, doesn’t automatically equate with a lack of intelligence or a lack of ability to deal with the junk.  It doesn’t mean you’re incapable of rational thought or incapable of making informed choices and decisions about how you want to live your life.

I was aware of an interest in spanking from being as young as five as six. I believe it’s an intrinsic aspect of my personality.  I don’t think I ‘picked it up’ as the result of a particular experience. It’s just the way I’m wired. I became interested in domestic discipline when I was in my early teens. I was visiting a friend and she lifted the floorboards in her much older brother’s bedroom to show me where he hid his collection of porno mags. Amongst them were some Japanese spanking magazines depicting non-sexual DD scenes. I was most intrigued. From then on I sought out DD in books and romance stories. I loved historical romances featuring domineering heroes and feisty heroines. The spanking scenes in those stories didn’t have an overt sexual aspect. They didn’t lead to graphic sex scenes. Nonetheless they had some kind of eroticism attached to them. I think they helped put me in touch with my own natural submissive core and that’s what I found exciting. It wasn’t solely about the spanking or the sex. It was about the mutual power exchange involved.  Those heroines submitted to the heroes because ultimately they wanted to. It appealed to an aspect of their nature. The heroes concerned were always loving, protective and caring. Since researching and writing about discipline relationships I’ve come to realize that they and the people who practice them are complex, multifaceted and altogether fascinating.

Sounds very much like my own experience ☺ Except there were no Japanese mags, just some internet stories. Somebody recently gave me some spanking magazines from the 70s/80s. They're fantastic.

Rank these implements in the order they would be used based on the severity of a brat’s transgression:

Hmm, I’m going to be annoyingly awkward and a bit mystical here and say that all of them rank first and last. It all depends on the use and intent. A hand spanking can be more severe than a paddling if the hand is applied harder and for longer than the paddle. You could make every single one of the above implements thrill or kill simply by the method of application and by the atmosphere surrounding the application.

Fair enough :) Your Shark Week question: If you were swimming in the ocean and saw a shark fin heading toward you, what would your reaction be? Are you a fleer or a fighter? 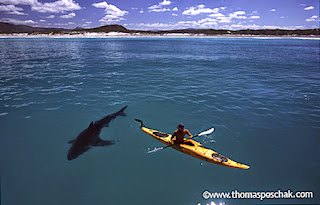 I’d probably die of vagal inhibition before the shark got anywhere near me. I saw Jaws. I know what happens when that fin appears. It would be followed by sinister music and then bang, the sea turns red and some part of your body ends up on a beach somewhere. Thankfully I can’t swim, so my chances of encountering a shark are fairly slim.  If I was ever unfortunate enough to come under shark attack, say one escaped from the local sea life aquarium or something, I’d like to think I’d stay calm enough to punch it on the nose. Apparently they have sensitive snouts and if you hit hard enough and aggressively enough there’s a chance of scaring it off. See, sharks are just submissives at heart and in need of a firm hand from a strong dom. ;-) 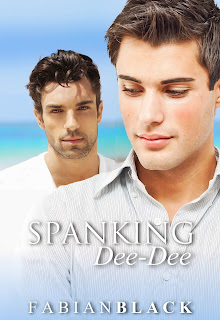 Haha! Okay, will never think of sharks and peaches the same way again. But I love what you say about finding eroticism in activities that aren't explicitly sexual. Very true, and as much as I love graphic sex scenes, there's a lot to be said for what is implied and/or left to the imagination. And for the sexiness of the intimacy of discipline, even when the discipline is non-sexual. Thank you so much for being here today, Fabian!

Thank you for inviting me and allowing me to ramble at length. It’s been a pleasure.

And now for Fabian Black's giveaway! Comment on this post to win a book of your choice from Fabian's collection. Her latest, Spanking Dee-Dee, is delightful, but there are plenty of great stories in her catalogue, so find out more here. The giveaway will run through 11:59 p.m. August 10th.

You can also read an excerpt from Moving On at The Excerpt Depot.
Posted by J.A. Rock at 12:00 AM