I have a website now. And a book update. And blackmail photos.

At last, a triumph over technology. Or at least, a vague demonstration of my ability to warily coexist with it. I have an actual website over at www.jarockauthor.com! Ooooh, fancy. And there's a half naked guy in ropes! Seriously, go visit just to see my naked guy.

I'll keep this blog up and running for a little while still, mostly because I'm afraid of change. But I'll try to de-clutter the sidebar, since all of that information is now in one centralized, relatively organized location. Perhaps eventually the blog will move to the website as well. But figuring that out is a lot to ask of me at the moment.

Also I chose the theme partly because of my love of the song "Rainbow in the Dark." "Don't tell anyone that," my mom suggested. But I'm not even remotely ashamed of my Dio infatuation.

Next up: Lisa Henry and I have a contract on THE BOY WHO BELONGED, our sequel to THE GOOD BOY! No date yet, but here's the unofficial blurb:

Twenty-one year-old Lane Moredock finally has a normal life. Six months after he was wrongly made a suspect in his parents’ Ponzi scheme, he’s settled down with his older boyfriend, Derek, and is working and attending school. But his happiness is threatened when his mother launches a Christmastime PR campaign to help appeal her prison sentence, and asks introverted Lane to be part of it.

Derek Fields has his hands full taking Santa photos, bird-sitting his sister’s foul-mouthed macaw, and helping Lane prepare for a television interview neither of them wants him to do. As he eases Lane through his anxiety, he worries that Lane sees him as a caretaker rather than a boyfriend, and that their age difference really does matter. He and Lane compensate for the stress in their lives by taking their D/s relationship to new levels--a relationship that Lane’s mother insists he should be ashamed of.

As Christmas draws nearer, the pressure builds. Pushy elves. Snarky subs. A bad fight. A parrot in peril. How the hell is Derek going to give Lane a perfect Christmas when the Moredock legacy threatens to pull them apart before the new year?

We had a lot of fun with this book. It turned out a little angstier than the idea we'd originally discussed. Which should come as no surprise. Get ready to see Mr. Zimmerman like you've never...okay, pretty much exactly as you've seen him before. Rude and angry.

In other news, props to my best friend Brian, who got his picture taken with the Westboro Baptist people (same church that protested Matthew Shepard's funeral, among lots of other anti-gay protests) when they came to New Orleans to protest Southern Decadence. When one of the protestors told Brian "YOU ARE FULL OF SIN," Brian shot back, "YOU ARE FULL OF HATE." Wish I could have been there, but I'll settle for loving this picture from over here. 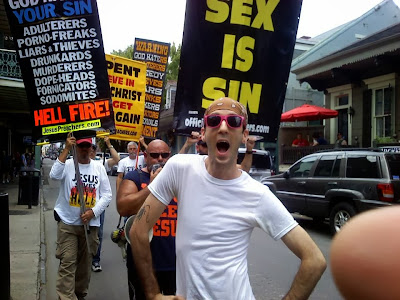 Finally, I received this in an e-mail from a longtime friend the other day. No text, just the word "Proof" in the subject line. This was taken four years ago in (I think) the Netherlands--though I was unaware of its existence. Yeah, there might have been signs that I was heading toward writing what I write now. Who doesn't love a surprise blackmail photo? 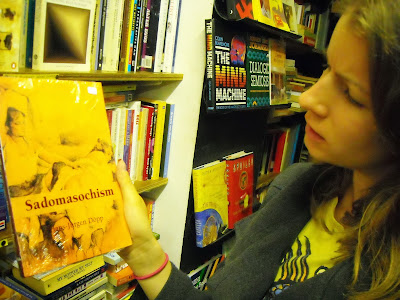 Email ThisBlogThis!Share to TwitterShare to FacebookShare to Pinterest
Labels: drool, experiences, I will learn technology, The Good Boy, Updates