If you filled out one of those character sheets about me and had to list my primary motivation, the driving force of my entire existence, it would be to be warm.

I'm always cold. Even when it's supposedly warm out. Those saunas they tell you not to spend more than ten minutes in? I feel like I could live in one of those, no problem.

New Zealand's wonderful, but it's not that warm this time of year. So when I got a great deal on a two-week trip to Australia in November, I seized it. Because despite some of the things I've said about Australia over the last couple of years, I have always wanted to go there. Mostly to see the Great Barrier Reef.

And to be warm.

I'm not really sure how big Australia is. I picture it about the size of Russia, but a blobbier shape (I'm told it's actually closer to the size of the US, but my mind has rarely been affected by facts). Like Russia, I imagine most of it's uninhabited--probably due to drop bears, crocs, snakes, land-adapted sharks, dinosaurs, angry kangaroos, Hugh Jackman, general laziness, etc.

Knowing my bus would go through Queensland, I contacted my dear friend/eternal nemesis Lisa Henry to let her know I'd be somewhere in the potentially Russia-sized neighborhood, and to see if she was anywhere near where I'd be going. It seemed like a long shot, since I've always sort of pictured Lisa living in a hut in the middle of nowhere, and not in a tourist destination.

But I discovered that Lisa has been holding out on me. Because she lives in a town RIGHT NEXT TO the Great Barrier Reef. What I didn't understand was how she could have failed to mention this before. I mean, we've been e-mailing for nearly two years now. And never once has she told tales about stingrays that swim up to her window at breakfast (apparently I also picture Lisa living in a submarine) or how she was nearly killed by a jellyfish in her backyard (a submarine with a yard).

And then I found out why.

It's because Lisa Henry doesn't care about the Great Barrier Reef.

Meh, she said. About the Great Barrier Reef.

"It's some coral and pretty fish," she said.

I pointed out that there are also sea turtles, stingrays, and my favorite creatures on the face of the earth--after dogs--sharks.

"I could take you to the aquarium," she said.

As though that's even remotely the same thing as a natural wonder of the world.

I thought about trying to explain about how magical it feels when I'm face to face with marine life, or about the book my dad read me as a kid about a girl who befriends a manta ray, and how much I wanted to be that girl, but I didn't see the point. Because if Lisa Henry needs to take a shit and can't find a toilet, she'll just use my dreams.

I'll still go visit her at the end of November, though. She's promised to take me to see crocodiles, an activity she seems to have selected specifically because she knows they're the only animal I fear. I, in turn, have promised to introduce her to Thanksgiving, which somehow seems like a nicer gesture than, "Hey, look, there's a crocodile; how's you're unending, soul-deep terror doing?" But I suppose there's no need to make this post about who's a better person.

I've also challenged her to play me in MarioKart 64, which, like the Fischer-Spassky chess match of 1972, will be not merely about the game, but also about nationality. I think whoever wins should officially be declared the one who speaks correct English. I'll make Toad's Turnpike my bitch, not just for me, but for America.

So yeah, get your thongs-not-the-buttcrack-kind on. Because in a few weeks, it'll be time for Thunder Down Under 2013 (working title). First I have to survive a long hiking thingy here in NZ. And see if I can get my Valu-Pak of Ramen through Australian customs. I paid $2.89 for it, and I'd hate to have to leave it behind.

Also, since I'm on a computer that's running Windows 98, it seems only right that I use MS Paint to hastily illustrate where I imagine Lisa lives. 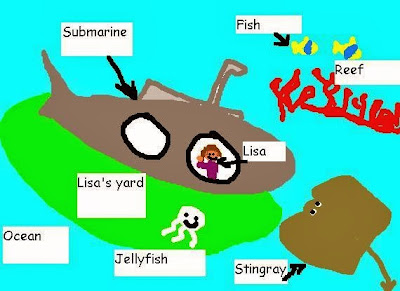 *this was over e-mail, so I'm not sure how she actually said it. But I imagine it was all kinds of airily.
Posted by J.A. Rock at 11:00 PM