WHEN ALL THE WORLD SLEEPS Cover Reveal 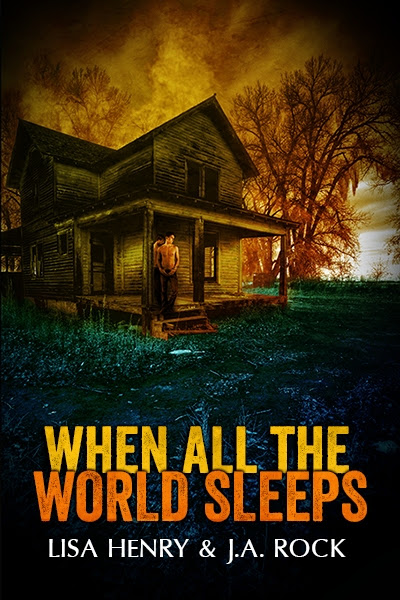 Have you all seen the gorgeousness that is Amber Shah's cover for WHEN ALL THE WORLD SLEEPS, Lisa Henry's and my upcoming southern gothic-y romantic suspense novel? So perfect. Lisa and I are also available to chat about the book over on goodreads. WAtWS is out March 24th, 2014 from Riptide and is available for pre-sale now (you save 11% on the ebook, 20% on print by ordering early!) And here's the blurb:

Daniel Whitlock is terrified of going to sleep. And rightly so: he sleepwalks, with no awareness or memory of his actions. Including burning down Kenny Cooper’s house—with Kenny inside it—after Kenny brutally beat him for being gay. Back in the tiny town of Logan after serving his prison sentence, Daniel isolates himself in a cabin in the woods and chains himself to his bed at night.

Like the rest of Logan, local cop Joe Belman doesn’t believe Daniel’s absurd defense. But when Bel saves Daniel from a retaliatory fire, he discovers that Daniel might not be what everyone thinks: killer, liar, tweaker, freak. Bel agrees to control Daniel at night—for the sake of the other townsfolk. Daniel’s fascinating, but Bel’s not going there.

Yet as he’s drawn further into Daniel’s dark world, Bel finds that he likes being in charge. And submitting to Bel gives Daniel the only peace he’s ever known. But Daniel’s demons won’t leave him alone, and he’ll need Bel’s help to slay them once and for all—assuming Bel is willing to risk everything to stand by him.
Posted by J.A. Rock at 8:26 PM