MARK COOPER VERSUS AMERICA - The Cover

Here's what's going down this weekend:

First, thanks to everyone who helped make THE BOY WHO BELONGED an ARe bestseller! Santa loves you and will bring you extra presents.*

Second, there's still time to join the fun on TBWB blog tour. The giveaway at Joyfully Jay is open through the 23rd, and Brin from THE BOY series has some beautiful pornaments to share with you there. Today Lisa and I are at Kay Berrisford's, answering some hard hitting questions. I revealed the truth about Lisa's secret slave dungeon, and Lisa threatened unspeakable cruelties against me if I didn't learn to speak Australian. And we talked a little about the book, too. Tomorrow we will be at Tara Lain's discussing how co-writing is turning us into a cranky old married couple. Lisa found some excellent pictures for that one. (There's another giveaway there!)

And finally, our frat boy Romeo & Romeo, MARK COOPER VERSUS AMERICA, comes out next month, and we have a lovely cover by Dar Albert to show you. See? 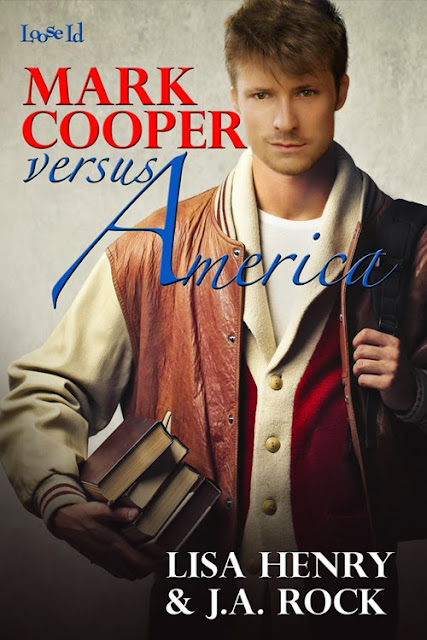 Mark Cooper is angry, homesick, and about to take his stepdad’s dubious advice and rush Prescott College’s biggest party fraternity, Alpha Delta Phi. Greek life is as foreign to Aussie transplant Mark as Pennsylvania’s snowstorms and bear sightings. So, when the fraternity extends Mark a bid, Mark vows to get himself kicked out by the end of pledge period. But then he’s drawn into Alpha Delt’s feud with a neighboring fraternity.Studious Deacon Holt is disappointed to learn Mark’s pledging Alpha Delt, his fraternity Phi Sigma Kappa’s sworn enemy. Mark is too beautiful for Deacon to pass up an invitation for sex, but beyond sex, Deacon’s not sure. He wants a relationship, but a difficult family situation prevents him from pursuing anything beyond his studies.Mark and Deacon’s affair heats up as the war between their fraternities escalates. They explore kinks they didn’t know they had while keeping their liaison a secret from their brothers. But what Romeo and Juliet didn’t teach these star-crossed lovers is how to move beyond sex and into a place where they share more than a bed. That’s something they’ll have to figure out on their own—if the friction between their houses, and between Mark and America, doesn’t tear them apart.

And Lisa is absurdly smug about the fact that we used the word arse instead of ass. I have to throw her a bone every now and then or she starts threatening me with the torch and the OED.

*I cannot actually guarantee this.
Posted by J.A. Rock at 4:28 PM