The Boy Who Belonged - Available in a Few Hours

By the time THE BOY WHO BELONGED hits virtual shelves, I'll be on a plane back to the U.S. So I wanted to go ahead and post this, since this plane ride's gonna take a while.

TBWB is the sequel to THE GOOD BOY, and will be released around midnightish by Loose Id!

And to celebrate, Lisa and I are going on tour!

We've been over at Kate Sherwood's already, talking about what Christmas means to us.
12/17: We'll be at Boy Meets Boy Reviews revealing the real story behind how Mr. Zimmerman came to live with Christy! There's a giveaway!
12/18: Attention is Arbitrary, offering up our rejected ideas for the sequel.
12/20: Joyfully Jay. Brin is posting his extremely naughty guide to decorating for the holidays. Giveaway!
12/21: Kay Berrisford interviews us about our experience meeting each other in person, our WIPs, and more.
12/22: Tara Lain. We follow up last year's "The Stages of a (Writing) Relationship" with "The Perils of a (Writing) Marriage." 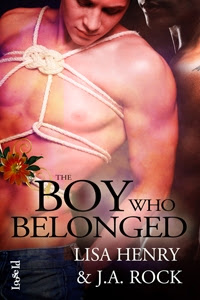 Twenty-one-year-old Lane Moredock finally has a normal life. Six months after he was wrongly made a suspect in his parents' ponzi scheme, he's settled down with his older boyfriend, Derek, and is working and attending school. But his happiness is threatened when his mother launches a Christmastime PR campaign to help appeal her prison sentence, and asks introverted Lane to be part of it.Derek Fields has his hands full taking Santa photos, bird-sitting his sister's foul-mouthed macaw, and helping Lane prepare for a television interview neither of them wants him to do. As he eases Lane through his anxiety, he worries that Lane sees him as a caretaker rather than a boyfriend, and that their age difference really does matter. He and Lane compensate for the stress in their lives by taking their D/s relationship to new levels--a relationship that Lane's mother insists he should be ashamed of.As Christmas draws nearer, the pressure builds. Pushy elves. Snarky subs. A bad fight. A parrot in peril. How the hell is Derek going to give Lane a perfect Christmas when the Moredock legacy threatens to pull them apart before the new year?
Posted by J.A. Rock at 3:05 PM