You probably know the drill. You keep reading the extras Lisa Henry and I post as part of The Thing, and you could win a copy of MARK COOPER VERSUS AMERICA! If you're just joining us and don't know the drill, you can read about it here!

Today, you're meeting Jackson Philips, Mark's step cousin. He's been charged by his Uncle Jim, Mark's stepdad, with helping Aussie Mark make friends at school. Jackson's not super into this. 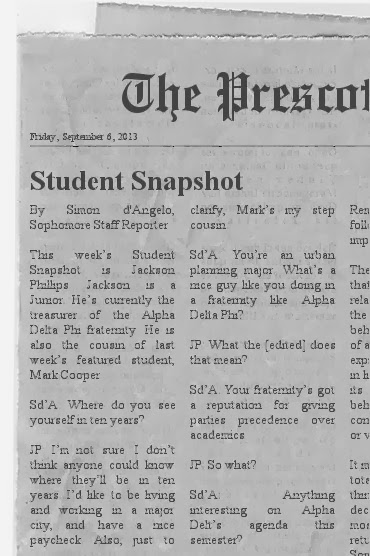 This week’s Student Snapshot is Jackson Phillips. Jackson is a Junior. He’s currently the treasurer of the Alpha Delta Phi fraternity. He is also the cousin of last week’s featured student, Mark Cooper.


Sd’A: Where do you see yourself in ten years?

JP: I’m not sure. I don’t think anyone could know where they’ll be in ten years. I’d like to be living and working in a major city, and have a nice paycheck. Also, just to clarify, Mark’s my step cousin.

Sd’A: You’re an urban planning major. What’s a nice guy like you doing in a fraternity like Alpha Delta Phi?

JP: What the [edited] does that mean?

Sd’A: Your fraternity’s got a reputation for giving parties precedence over academics.

JP: Yeah, we’ve got the Wild West party coming up. Should be huge. We’re bringing in a mechanical bull. Invites just went out.

Sd’A: I was thinking more along the lines of community service activities.

JP: We’ve got the food drive in November.

Sd’A: But you mentioned the party first. So you consider it more important?

JP: What is this, Hardball? Didn’t you almost get fired last year when you interviewed the dean and asked about his alleged affair?

Sd’A: Thank you for your time. 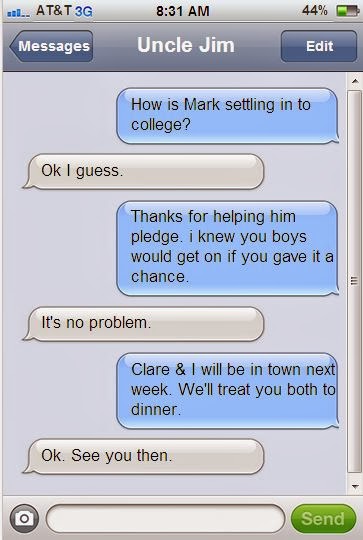 And head over to Lisa's house to meet Brandon!