Woot! Take the Long Way Home is now available from Loose Id, and should become available from other distributors shortly. I'm going to be visiting some blogs in the next few days to talk about vegan myths, psychologically troubled MCs, what my sister's dollhouse taught me about my sexual orientation, and more. I'll be giving away a backlist title at each stop, so if you're interested, here's where I'll be:

Update: You can buy TTLWH from Amazon and ARe now as well. 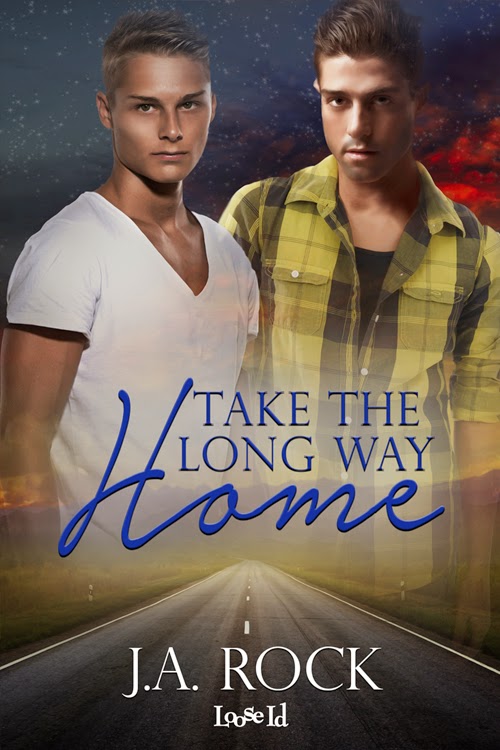 Dresden Marich has failed out of high school three months shy of graduation. He’s infatuated with his online friend, Evan, alienated from his family and former classmates, and still trying to recover from his father’s death six years ago. He’s also keeping a troubling secret about his older brother, Gunner, who is away at boot camp.
Then Dresden meets Caleb, a judgmental environmentalist who’s hardly Dresden’s fantasy come true. But Caleb seems to understand Dresden’s desire for rough sex, big feelings, and, ultimately, safety. As Dresden becomes embroiled in a farmers market drama involving Caleb, a couple of bullying tomato enthusiasts, and a gang of vigilante vegans, he discovers he might be willing to trade a fantasy relationship with Evan for a shot at something real with Caleb.
But Dresden fears telling quick-to-judge Caleb his secret, and the news that Gunner is coming home sends him fleeing to California for a chance to meet Evan in person and hopefully fall in love. When the encounter doesn’t go as expected, Dresden faces a choice: stay in California and carve out a new life, or take the long road home to his family, Caleb, and a past he must face if he has any hope for a future.

Major thanks to my editor Katriena, Dar Albert for the cover, Lisa Henry and my mom for beta-ing, my friend Brian, to whom this book is dedicated, and with whom I learned a lot of stuff about growing up--*orchestra starts to play me offstage, but I'm still talking*--and to all of you readers out there, even if you don't read this book. I'm just so happy there are people in the world who love books. That is all.
Posted by J.A. Rock at 7:29 PM No comments:

Hope you all had excellent holidays! Mine were pretty awesome. I went to West Virginia for Christmas, where I continued one of my favorite traditions: secretly collecting rude quotes from my mother.

Since you don't know her, I should explain. In almost all areas of life, she is an exceptionally kind, generous human being. In fact, she visited this very blog a couple of years ago and proved that she can turn even naughty things nice. Which makes it all the funnier when, during the holidays, she suddenly develops the mouth of a sailor. She doesn’t hate Christmas, exactly—she loves spending time with her family—but, um, she’s not a big fan of all the hullaballoo surrounding it. Still, any coarse things she says at Christmas are said in jest.

Here were some of this year’s gems:

When I forgot to get shallots at the grocery store, and then later offered to sing her a Christmas carol to make up for it:
“I have a song. It’s called someone forgot my fucking shallots.”
In the Walmart parking lot, when a car stopped in front of ours to let some people out:
“They need to get that piece of shit [car] out of the way. Oh my god, the entire fucking Duck Dynasty is getting out.”

Instructing me not to let the pecan pie burn:
“Ruin my pie and I will ruin you.”

On the Christmas concert she had to sit through at the school where she teaches:
“It wasn’t so bad, because I had some Sudoku.”

“The only actual Christmas carol they sang was ‘Baby It’s Cold Outside.’ Which is basically about date rape.”

I was back in Chicago by New Year’s, where my roommate Chris announced that his resolution was to make up a song every day of 2015 and record it. So far I’ve been treated to such canonical melodies as “The Missing Roommate Blues” and “What’s Kate Winslet Doing These Days?” If I’m soon found dead in the apartment with claw marks on my walls and an open diary outlining my rapid descent into madness…you’ll know why.

He’s also started doing this thing where he pretends that I went missing eight years ago, and that I’m not me but rather a detective assigned to investigate his roommate's disappearance. It’s all very meta, and sometimes genuinely unnerving to be referred to as “detective” for hours on end. Chris is a professional improv performer, so I’m a bit concerned about how indefinitely he might keep this up.

So yes, 2015 is shaping up to be just as weird and wonderful as 2014. And I want to say, very sincerely, that 2014 was one of my favorite years ever. Thank you so much to everyone who helped make it that way. To anyone who read my books and made me feel like a Real Writer Person, or who wrote books that I loved, or recommended great books to me, or helped me with books I was writing, or let me help with books you were writing, or otherwise interacted with me… I’m very grateful, and I’m looking forward to the New Year!
Posted by J.A. Rock at 3:19 PM 2 comments: