So what have I been doing lately that’s kept me from being a responsible blogger? Mostly working on THE SUBS CLUB, a new series for Riptide that starts releasing in December. Also reading MEG 4: HELL’S AQUARIUM. Because sharks.

Over the next few months, I’ll post more details about the characters and the four books in the series. But here's a brief overview of the MCs. There's Miles, the socially awkward painslut. Dave, who’s great at role-playing the brat but secretly wants real discipline. Kamen, the overly enthusiastic jock who realizes he’s wayyy into costumes. And Gould, who’s a mystery even to his friends. Plus, lots of side characters. So many that I had to make a chart. It looks like this:

Here are the planned release dates:

The Merchant of Death - Out Now!

I'm only six days late posting this, which I consider an accomplishment. But yes, THE MERCHANT OF DEATH, book two in the PLAYING THE FOOL trilogy, is here! It's available at Riptide, Amazon, ARe, B&N, and Kobo. Thank you to everyone who hung out with Lisa Henry and me on the tour! We had lots of fun getting real about junk food, Pooh, conmen, and drag. We hope you'll join us again for the TEMPEST tour next month. We may be giving away an alarmingly realistic looking donut pillow that has been personally gnawed on by me, and some donut socks. 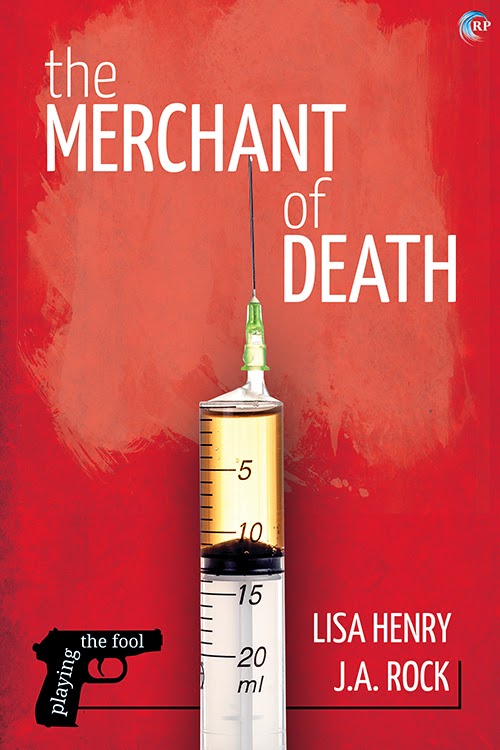 All’s fair in love and war.
There’s something rotten in the state of Indiana. When con man Henry Page takes it upon himself to investigate the death of an elderly patient at a care facility, he does so in true Shakespearean tradition: dressed as a girl.
FBI Agent Ryan “Mac” McGuinness has more to worry about than Henry’s latest crazy idea. Someone is trying to send him a message—via a corpse with a couple of bullets in it. He needs to figure out who’s trying to set him up before he gets arrested, and he really doesn’t have time for Henry’s shenanigans. Then again, he’d probably be able to focus better if Henry didn’t look so damn distracting in a babydoll dress and a wig.
But when Mac discovers that Henry has been keeping a secret that connects the cases, he has to find a way to live on the right side of the law when he just might be in love with the wrong sort of man.
Posted by J.A. Rock at 8:08 PM No comments: