THE GRAND BALLAST is a thing that will happen soon!

So for the past two years I've been working on a book called THE GRAND BALLAST. It was originally conceived as a ~30K novella about a guy who works in a sex circus, and then it grew and grew and became a 95K novel about obsession, art, love...and a sex circus. And it's finally about to be a thing that people can buy, on June 29th!

We've got some gorgeous cover art by MC Blackman: 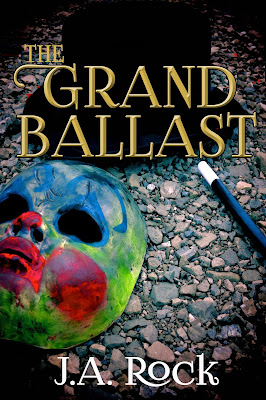 We've got a blurb:

Valen’s not an easy man to know, and Bode shed his romantic notions under Kilroy’s brutal employ. Yet their growing affection becomes a strange and dangerous salvation as they attempt to overthrow the shadows of their pasts and wade together through a world of regret, uncertainty, beauty, and terror.

But Kilroy isn’t going to let Bode go so easily. Long ago, Bode was responsible for the loss of something Kilroy held dear, and he still owes Kilroy a debt. As the three men battle toward a tangled destiny, Bode must decide if his love for Valen is worth fighting for—or if he was and always will be a pawn in the story Kilroy Ballast will never stop telling.

And we have a warning that while this does feature a love story, it is not a genre romance. Which I guess is just my way of saying there's some violence, and the love story is not the main focus. I established a few weeks ago that I'm not really sure what makes a romance, but just know that this is definitely not man-chest-on-the-cover romance, and that there are potential abuse and sexual violence triggers.

I'm excited to share this with you guys, and I'll be posting excerpts and such in the coming weeks!
Posted by J.A. Rock at 9:43 PM