THE GRAND BALLAST is here!

THE GRAND BALLAST is out now, and is available at Amazon, Smashwords, ARe, Kobo, B&N, and in paperback!

I'll be around the Internet giving away books these next few days, and I hope you'll join me for excerpts, prizes, and some behind-the-scenes glimpses of TGB. How did Kilroy get his name? Was it fun writing such a crazy fucker? What happens when a pantser attempts a book with dual timelines? These are some of the questions I'll be trying to answer on the blog tour. 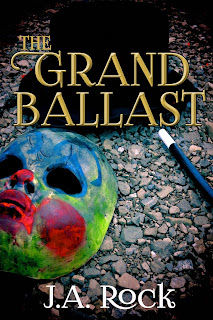 In a future where live sex shows abound to keep a jaded population entertained, dancer Bode Martin falls for the brilliant and unstable Kilroy Ballast, who molds Bode into the star attraction of his erotic circus, the Grand Ballast. Drugged beyond any real feeling, Bode trades freedom and his once considerable pride for an illusion of tenderness—until he inadvertently rescues a young man from a rival show, and together they flee to an eccentric town in the west where love still means something.
Valen’s not an easy man to know, and Bode shed his romantic notions under Kilroy’s brutal employ. Yet their growing bond becomes a strange and dangerous salvation as they attempt to overthrow the shadows of their pasts and wade together through a world of regret, uncertainty, beauty, and terror.
But Kilroy won't let Bode go so easily. Long ago, Bode was responsible for the loss of something Kilroy held dear, and he still owes Kilroy a debt. As the three men battle toward a tangled destiny, Bode must decide if his love for Valen is worth fighting for—or if he was and always will be a pawn in the story Kilroy Ballast will never stop telling.