I Finally Wrote A Book Your Children Can Read.

Minotaur is out now! And you know what Booklist said about it at the end of their review?

YA/Mature Readers:  Teens will relate to Thera’s suspicion, loneliness, and search for identity and restitution as well as the compelling settings, classic young quest theme, and paranormal elements.

That's right, I wrote a book that is apparently appropriate for young adult readers.

I had a feeling it was, but I didn't want to say anything, because I am terrible at knowing what genres my work fits into. Especially Minotaur, which is a little bit fantasy, a little bit gothic, a tiny bit lesbian romance, and a whole lot of weird. But I've been super excited by the teen response to this book so far, and wanted to provide a little more information about the YA crossover possibilities.

I was asked when I submitted Minotaur if I wanted to put it with Riptide's YA line. We eventually decided against that, largely because it it doesn't have much of a mainstream YA "feel." While the action takes place during the time MC Thera is 16-18, Thera is actually an older narrator looking back on her teenage years. She's also very adamantly not a hero. So if YA readers are looking for a story with characters who are good role models, this is probably not that book.

The story does have some sexual content. It's not graphic the way it is in my romances, but it does go a bit beyond kissing. There's also some sexual imagery in a couple of the book's surreal sequences.

The book also contains violence, but that violence is fairly mild compared to something like The Hunger Games.

While I don't think of Minotaur as YA in the traditional sense, I'm very happy that it's connecting with some younger readers out there. I know I've written a lot of smutty things, but believe it or not, YA was always my dream genre. I would definitely like to write more YA-ish type things in the future. 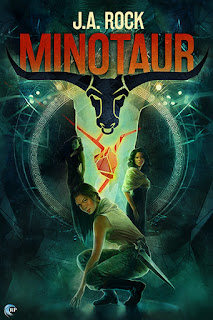 Know this: I am not a warrior. I am a disease.
When I was six, my parents died.
When I was sixteen, I was locked away in Rock Point Girls’ Home. Nobody wants to deal with a liar. An addict. A thief.
Nobody except Alle. She is pure, and she’s my friend in spite of all the rotten things I am.
There was once another girl like me—long ago. A cast-off daughter. A lying little beast who left a red stain across the land with her terrible magic. She’s imprisoned now in a maze high up on the cliffs. They say she’s half woman, half bull. They say she dines on human tributes and guards a vast treasure. They say she was born wicked.
But I know her better than the history books or stories do. She and I dream together. Our destinies are twisted up like vines.
Except I’m not going to turn out wicked like she is. I can save myself by destroying her. I’m going to break out of this place, and I’m going to enter the labyrinth and take her heart.
And once I’m redeemed, maybe Alle will love me.
Posted by J.A. Rock at 12:42 PM