THE SILVERS is coming (back) soon!

Today is the cover reveal for The Silvers, which is returning to shelves July 11th! The Silvers is a queer speculative novel originally published elsewhere under the name Jill Smith. I'm so excited for its re-release with Riptide Publishing/Anglerfish Press, and I could not be happier with the new cover by Simone. You can view it on the RT Book Reviews site, and can comment for a chance to win an advance e-copy.

You can also pre-order The Silvers now from Riptide's site.

If you're not sure whether The Silvers is right for you, here are some additional details, since it is a bit different from some of my other J.A. Rock work:

-The book is science fiction, but not very "sciency"--there are aliens, but don't expect any laser gun battles or high-tech stuff. It's actually a very domestic story where one MC just happens to be an alien.
-It's a love story, but not a genre romance. It's not dark like The Grand Ballast or Another Man's Treasure, but be advised that it's not necessarily meant to make you feel warm and fuzzy inside.
-It's not erotic. If you're looking for the steamy stuff, it ain't here.
-This second edition doesn't feature any major content revisions, so if you read the original, this one is very similar. Except seriously, the new cover... ;) 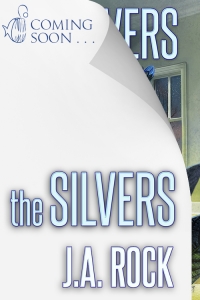 What humans want from the Silver Planet is water. What they find is a race of humanoids who are sentient, but as emotionless and serene as the plants and placid lakes they tend.


B, captain of the mission, doesn’t believe that the “Silvers” are intelligent, and lets his crew experiment on them. But then he bonds with Imms, who seems different from the others—interested in learning, intrigued by human feelings. And B realizes that capturing, studying, and killing this planet’s natives has done incalculable damage.
When a fire aboard B’s ship kills most of the crew and endangers Imms, B decides to take him back to Earth. But the simplicity of the Silver Planet doesn’t follow them. Imms learns the full spectrum of human emotions, including a love B is frightened to return, and a mistrust of the bureaucracy that wants to treat Imms like a test subject, even if they have to eliminate B to do it.

Previous Reviews of The Silvers