TAKE A CHANCE is here!

The Take A Chance anthology is officially out! Check out this collection of stories by an awesome group of authors than I'm so honored to be a part of. You can buy from Amazon, Beaten Track, ARe, B&N, and Smashwords.

About Take A Chance

A single moment can change everything.A university student preparing to confront the adolescent crush who betrayed him. A demon embroiled in a battle against his very nature. A soldier, mentally scarred after fighting in The Great War, torn between propriety and his heart. Though separated by time and distance, culture and reality, these young men all have one thing in common: they each stand at a crossroads in their life and face a choice that will alter the course of their future.These twelve tales in this collection of gay romantic fiction range from sweet to erotic, contemporary to historical, paranormal to grittily realistic. Whether centred around the fear associated with coming out, the thorny issue of trust, or the struggle for survival, each story explores in its own way the courage needed to overcome personal obstacles and take a chance on love. 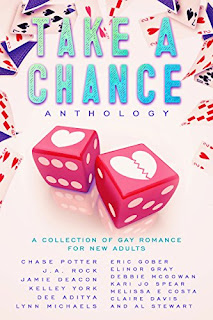 My story in Take A Chance is called "Stranger Than Stars." In it, a young man named Peter goes backpacking in Europe following a troubling diagnosis. One night in Amsterdam he wanders into a leather bar called The Cock Ring, where a "pageant" is taking place--one of five performers will be voted Mr. Cock Ring, and will be raffled off to one of the bar patrons for two hours of kinky fun.

Peter doesn't participate in the raffle, but through some unusual circumstances, ends up purchasing a night with one of the pageant contestants--a jaded, hostile ex-pat named Buck. Over the course of their night together, the two lonely men begin to bond in unexpected ways.

"Stranger Than Stars" contains light kink, but the focus isn't kink or sex--it's more of a story about searching for connection in a world that sometimes feels cold and impersonal.

Excerpt from "Stranger Than Stars"


Number Five was not having fun. He didn’t look abstract, didn’t look like the discarded fantasy art of a moody, pubescent god. He was depressingly real—sallow and wary—but beautiful in a ghoulish way. I didn’t catch his name. He wore cargo pants that rode low, so the top of his boxers puffed out from the waistband. No shirt. Music came on, but he didn’t dance. He just stared at the crowd, looking sullen and…I don’t know. Feral. He walked up to one patron and yanked the glass from his hand. The guy’s expression was cartoonishly shocked, and that made me laugh. Number Five zeroed in on me. He walked over to my side, to the edge of the stage, and dashed the drink in my face.
Posted by J.A. Rock at 5:06 PM