THE PREACHER'S SON is out now!

THE PREACHER'S SON, Lisa Henry's and my first collaboration since 2015, is now available from Amazon! It's an angsty, bittersweet story about two men struggling to come to terms with the damage they've done to themselves and others with some of their life choices. The discount release week price for the ebook is $4.99, so grab it now! 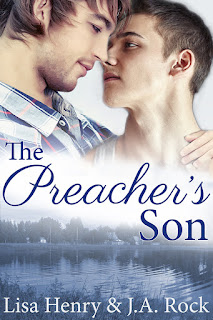 Jason Banning is a wreck. His leg’s been blown to hell in Afghanistan, his boyfriend just left him and took the dog, and now he’s back in his hometown of Pinehurst, Washington, a place that holds nothing but wretched memories…and Nathan Tull. Nathan Tull, whose life Jason ruined. Nathan Tull, who will never believe Jason did what he did for a greater good. Nathan Tull, whose reverend father runs the gay conversion therapy camp that Jason once sought to bring down—at any cost.
Nathan Tull is trying to live a quiet life. Four years ago, when Nate was a prospective student visiting UW, his world collapsed when senior Jason Banning slept with him, filmed it, and put the footage online. A painful public outing and a crisis of faith later, Nate has finally begun to heal. Cured of the “phantoms” that plagued him for years, he now has a girlfriend, a counselor job at his dad’s camp, and the constant, loving support of his father.
But when he learns Jason is back in town, his carefully constructed identity begins to crumble. As desperate to reconcile his love for God with his attraction to men as Jason is to make sense of the damage he’s done, Nate finds himself walking a dangerous line. On one side lies the righteous life he committed himself to in the wake of his public humiliation. On the other is the sin he committed with Jason Banning, and the phantoms that won’t let him be. But is there a path that can bridge those two worlds—where his faith and his identity as a gay man aren’t mutually exclusive?
And can he walk that path with the man who betrayed him?
Posted by J.A. Rock at 6:00 AM No comments:

PRESCOTT COLLEGE is back!

Hi all! The Prescott College books are back on sale! MARK COOPER VERSUS AMERICA and BRANDON MILLS VERSUS THE V-CARD have been re-released with new covers by the awesome Ana J. Phoenix. There's no significant difference to the text, so no need to buy again if you have the first editions.

We'll have updates soon about the audio versions coming in March and April of 2018, produced by Joel Froomkin, as well as the third book in the series, LIAM MCDERMOTT VERSUS AUTHORITY.

But for now, you can pick up copies of MARK COOPER at Amazon, B&N, Smashwords, or Kobo.

And BRANDON MILLS at Amazon, B&N, Smashwords, or Kobo. 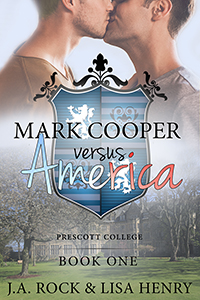 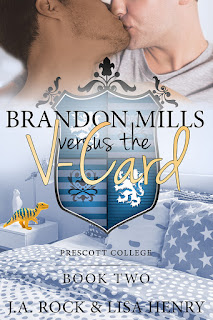